Thank you, everyone, for your patience.  I pray that you and your family remain safe and healthy, and we will see you online for

This is Christopher Ewing from the Indie Music Channel.  As you know, we postponed the 2020 Indie Music Channel Awards and Indie Music Hall Of Fame Inductions ceremony that was scheduled for April 26 due to the COVID-19 pandemic.  We have been waiting to see how everything panned out in order to see when the ceremony could be rescheduled.

As of right now, the United States, as well as other countries, have extended their “stay-at-home” orders and travel restrictions for an additional month. The Grammy Museum, which was the site of this year’s IMC Awards, also remains closed for another month and they are taking a “wait and see” approach as to when they will re-open.

But, just because the world has stopped, it doesn’t mean the music has to also!  As the saying goes, “the show must go on” and that’s what we intend to do!

There will also be a musical “pre-show”, as well as video taped performances featuring IMC artists, nominees and IMHOF inductees from around the world!

Submissions to submit songs and music videos for awards consideration will remain open for one more week.  Submissions close on Monday April 27.

Nominees will be announced on Monday May 4

​Winners will be announced online on Sunday May 24 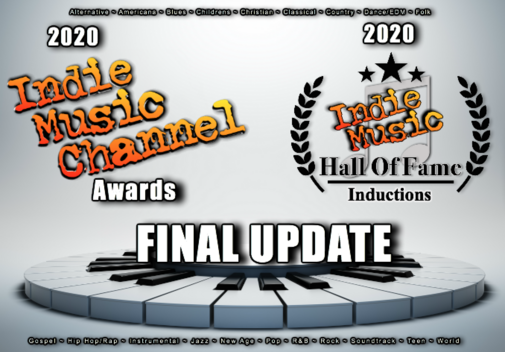